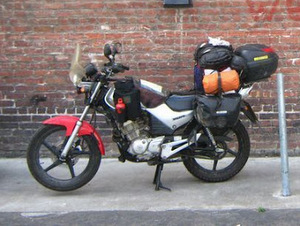 For economical reasons, I ride a small bike.  At first this was “Rudolf” a Yamaha YBR 125cc motorbike; this bike was phenomenal!  Slow by motorcycle standards but quick enough, and it managed unbelievably well considering the bad roads it took on.  Above all its fuel consumption was brilliant.  It was fuel injected – being a European model – and managed up to 50km on one litre.  This meant a great tank range with the standard 13 litres, and I rarely needed to carry extra fuel.

In Guatemala, with something over 90,000km on the clock, the Yamaha died, a long story, and mainly my fault.  I switched to a Honda XR125L “Rodney” and have regretted this really (For info on buying a bike in Guatemala see the FAQs page).  The fuel consumption is much worse, being carbureted, attaining 35km/l at best (less than 24km/l at times rivalling some 650ccs!). 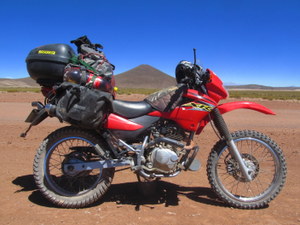 Ancillary parts on the Honda seem to have worn out consistently quicker than the Yamaha, which itself needed hardly any maintenance at all.   In fact, the Honda performed better with non-OEM parts to the point where I would only ever buy Honda OEM for engine internal parts (otherwise aftermarket), bearing in mind it is a Chinese built 125cc not a Japanese built higher-end Honda, where I am more certain OEM is recommended.

Finally with 72,000km on the clock the Honda’s third gear broke and I rode the remaining 8k without it (luckily all low altitude). Also, I found the Yamaha a bit nicer to work on, air filter behind the side panel, and the valves easily accessible, whereas the Honda needs the side panels, seat, tank and exhaust-gas recycling tube removing (something I considered removing completely to try and aid high-altitude combustion).  I also had numerous small electrical glitches with the Honda, which nearly got me into a lot of trouble.

Also, Honda shops seemed to staffed by snooty pricks, whereas Yamaha would stop all work to help me out at a discounted price, even stripping store models to get needed parts.

The Honda uses 17″ rear tyres and 19″ front, these are a bugger to find.  The (European) Yamaha uses 18″ tubeless and meant for easy repairs, but still tricky to find tyres as most countries outside of Europe use an 18″ tubed rim.  Eventually I made the switch to tubes on the Yamaha as the tubeless rims were leaking through damage; dents and dings. Better of course is an 18/21″ combo such as on a Yamaha XT125.

One would think the Honda would be a better ride, and I think it was marginally, though it was marginal and it isn’t to be considered a Dual-sport bike in this regard.

Essentially, several times with the Honda I had to turn back – though on bad, steep and high altitude roads.  The Yamaha never failed and I often thought on those few occasions on the Honda, “the Yamaha would have managed this.”  I also pushed the Honda a LOT.

My recommendation therefore is to stick with small but look for fuel injected!  This will help with economy and high-altitude running and make long deserted stretches easier with regards carrying fuel, and maintain the advantage of parts availability.  Models I personally am looking towards, as a guide, are the Yamaha XT250 or WR250, both fuel injected.

The bikes have little in way of prep work.  I’ve had some simple racks welded on and I like to have engine bars, to protect the pedals more than much else.

In future I’ll switch from the top box to a tank bag or probably tank-panniers, my old tank panniers wouldn’t fit on the Honda.  This helps move weight forward and would save my food from bouncing around so much at the very rear (and most moving area) of the bike.  A top box is not recommended.

I used to have hand-guards, but don’t find much benefit, more likely to break your wrist and your levers can still break.  However, they do provide wind protection in cold climes…so next time I’ll try some simple plastic guards (without alloy rails).  I prefer to to trim the brake levers down to to a two or three finger like lever to help save them from breaking.  Mirrors break with or without the guards.

The Yamaha had a screen, but this broke in falls, and with the low speeds, especially on dirt, I didn’t think it was really necessary and never replaced it.

I fit fork boots. And now have a tool tube.

As I camp almost always I also have to have some form of charging camera and head-torch batteries and, now, a kindle.  I therefore carry a charger (in the bike’s standard OEM tool box) for AA/AAA (the camera has AA) and a USB socket from a simple car cigarette socket at the dash. 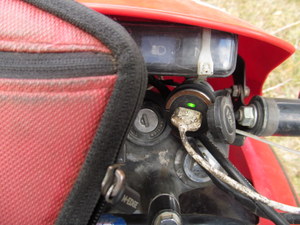 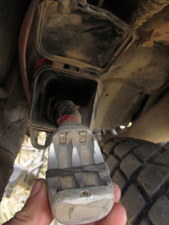 I’ve had a lot of tyres, and lots of poor ones.

Duro have been really good buys, economical and tough (only one puncture from several of their tyres…bearing in mind I’ve had 76 punctures!).

A Bridgestone was also one of the few tires not to get punctures, but it cost a lot.

Metzeler lasted really well, but punctured as much as any other cheap tire. 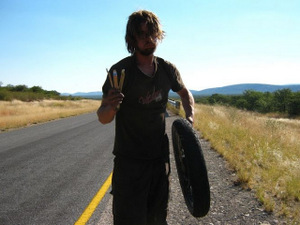 I’ve used Golden Boys and CRTs with no problems and I’ve just fitted a Pirelli MT21 at great expense, and a Rivaldi front. (Update see below)

Front tires are somewhat less important (grip aside) in that the lack of load on it means it rarely punctures(unless a MT60 POS) and lasts well.

In sand you can ride just anything as far as I’m concerned, I find a knobbly rear tends to dig-in, though of course I don’t have much engine power too to drive this along, and a knobbly front will catch the edges of tire ruts in the sand, should it be a sandy road (as opposed to smooth untouched desert).  A smoother road-ish tire was better in sand.

In mud, well, if it’s real sticky it tends to stick!  And, again, I don’t really have the power to fling the mud out of even the biggest knobbles, but they do help.

If it’s hard-packed red mud and wet you may as well fit skates and hope the road doesn’t go uphill….for a 125 will just spin and slip lacking the power.

UPDATE (May 2013) I’ve used a few Pirelli tyres and been very disappointed.  MT60s are very thin carcuses and only two plies, puncturing very easily, they really are like bicycle tyres.  There are copies of the same tyre but with more plies and deeper tread, by almost all manufacturers.

All this above is new, and below most new info is in GREEN! to help you relax when stressing over packing!

Don’t get too bogged down when first planning your list, it’s simple, and might help to remember that it’s just….

Tools and parts,
Camping and cooking,
Hygiene, (hardly a section at all)
Clothes,
…and paperwork.

People have the impression that I carry a lot, but I think this is a bit of a misconception, my Ortlieb panniers are only 40litres for the pair (most hardboxes are 40 litres or more each).  As well, as I camp almost every day so I have to carry a lot of food and water….

Below is an itemised list, which gives a complete packing list as well as recommendations on some equipment choices I have made or learnt.

But if you do have any questions, just ask…. 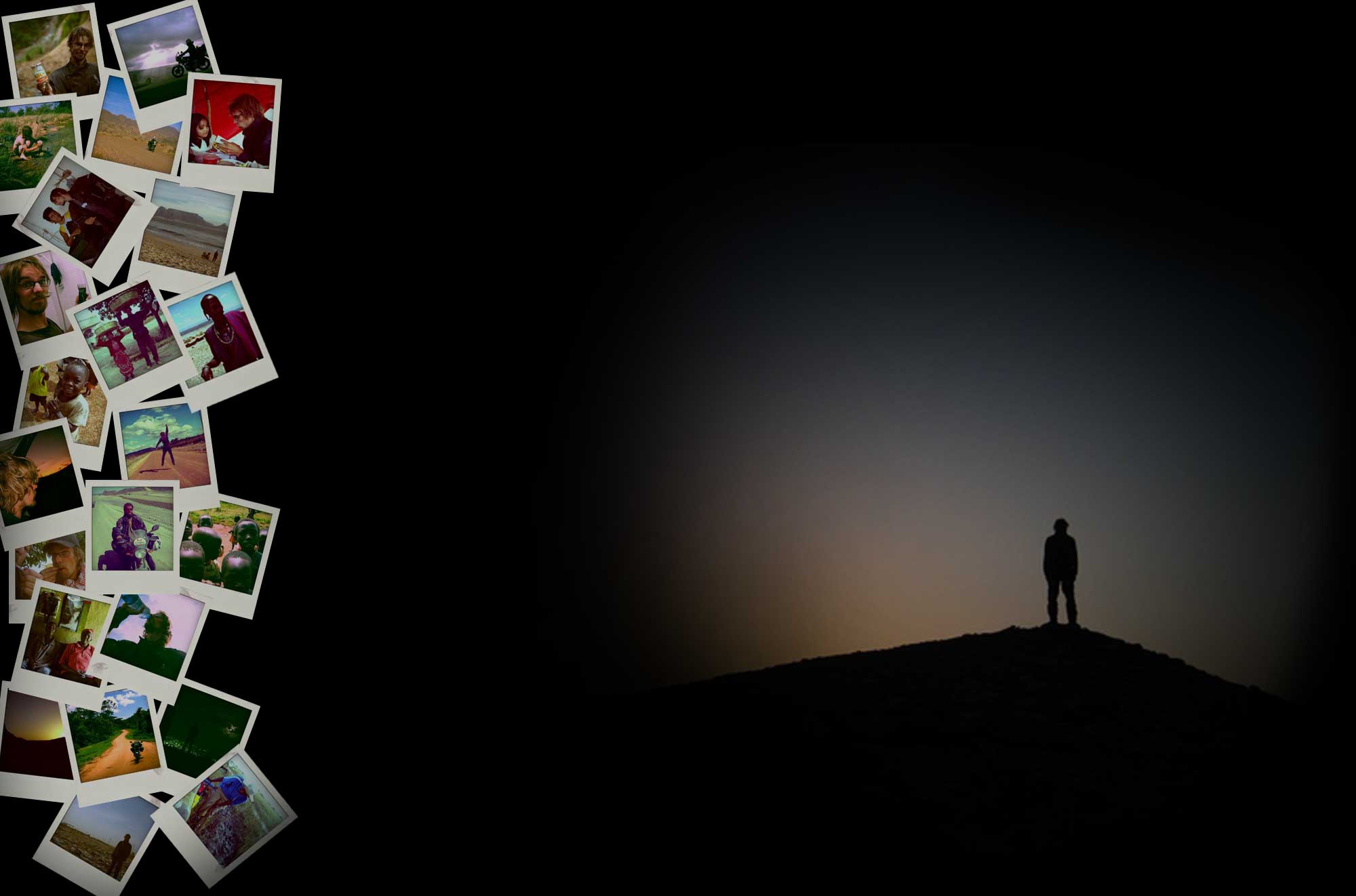